Trantor is a fictional planet in Isaac Asimov's Foundation Series and Empire series of science fiction novels. Trantor was first mentioned in a short story by Asimov, 'Black Friar of the Flame', later collected as The Early Asimov , Volume 1. It was described as a human-settled planet in the part of the galaxy not ruled by an intelligent reptilian race (later defeated). Later, Trantor gained prominence when the 1940s Foundation series first appeared in print (in the form of short stories). Asimov described Trantor as being in the centre of the galaxy. In later stories he acknowledged the growth in astronomical knowledge by retconning its position to be as close to the galactic centre as was compatible with human habitability. Trantor is the capital of the Galactic Empire . Later, after the fall of the Empire, the planet is isolated from all technological splendor, undergoing a process of involution in which its inhabitants, mostly agricultural, call the planet Hame, which according to Asimov is a distortion of the word "Home".

The earlier history of Trantor is recapitulated in The Currents of Space , mentioning the five worlds of the Trantorian Republic growing into the Trantorian Confederation and then Trantorian Empire (evidently modelled on the Roman Republic, originally ruling only part of central Italy, developing into the vast Roman Empire). At the time when Currents takes place, Trantor controls about half of the worlds in the Galaxy, while the other half is divided into innumerable independent worlds and miniature empires – which naturally makes a Trantorian Ambassador a person of great consequence on any of the still-independent worlds. Later on, conquest of the entire galaxy made the Galactic Empire , with Trantor as its capital planet, a reality; the planet no longer sending out ambassadors, but only governors to royal subject worlds. This situation had already existed for thousands of years at the time of Pebble in the Sky , the next chronological book on this timeline.

Trantor is depicted as the capital of the first Galactic Empire . Its land surface of 194,000,000 km² (75,000,000 miles², 130% of Earth land area) was, with the exception of the Imperial Palace, entirely enclosed in artificial domes.  It consisted of an enormous metropolis (an ecumenopolis) that stretched deep underground, and was home to a population of 45,000,000,000 (45 billion) human inhabitants at its height (although the Second Foundation mentions a figure ten times that of administrators alone), a population density of 232 per km² (600 per mile², in comparison, New York City in real life possesses an estimated 27,147.4 people per mile²). Its population was devoted almost entirely to either administration of the Empire or to maintenance of the planet itself. The Encyclopedia Galactica states further on Trantor:

"As the centre of the Imperial Government for unbroken hundreds of generations and located, as it was, toward the central regions of the Galaxy among the most densely populated and industrially advanced worlds of the system, it could scarcely help being the densest and richest clot of humanity the Race had ever seen."

A Trantorian day lasted 1.08 Galactic Standard Days. One of the prominent features of Trantor was the Library of Trantor (variously referred to as the Imperial Library, the University of Trantor Library, and the Galactic Library), in which librarians index the entirety of human knowledge by walking up to a different computer terminal every day and resuming where the previous librarian left off. Around 260 FE, a rebel leader named Gilmer attempted a coup, in the process sacking Trantor and forcing the Imperial family to flee to the nearby world of Delicass, renamed Neotrantor . After the sack, the population dwindled rapidly from 40 billion to less than 100 million.

Most of the buildings on Trantor were destroyed during the sack, and over the course of the next two centuries the metal on Trantor was gradually sold off, as farmers uncovered more and more soil to use in their farms. Eventually the farmers grew to become the sole recognised inhabitants of the planet, and the era of Trantor as the central world of the galaxy came to a close. It began to develop a dialect very different from Galactic Standard Speech, and the people unofficially renamed their planet "Hame", or "home". As revealed to the reader at the end of Second Foundation , not all these farmers were what they seemed, with the now-rustic Trantor serving as the centre of the Second Foundation. From Trantor, the Second Foundationers secretly guided the development of the Galaxy (roughly parallel to the city of Rome becoming, after the fall of its empire, the headquarters of the Papacy, with its enormous influence on the development of Medieval Europe). Indeed, their self-perception as leaders of the future Second Empire is captured in the Second Foundationers' use of the word "Hamish" to describe the farmers despite reserving for themselves use of the word "Trantorian." It is noted that it was the Second Foundation which ensured that the famed library would survive the sacking of Trantor and the destruction of its urban culture – especially significant, considering that the library was vital to the Second Foundation itself. In the Asimov canon, where events of this time are depicted mainly from a Foundation perspective, the Fall of Trantor is mentioned only as a piece of faraway news and in various later short references. However, Harry Turtledove attempted to fill in the details in his "Trantor Falls", focusing on the efforts by the Second Foundation to survive during the sacking of Trantor (published in the 1989 Foundation's Friends, where various writers took up the Foundation universe). 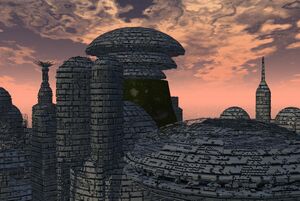 According to the original Foundation Trilogy (1951), Asimov states (by way of the Encyclopedia Galactica) that "... the impossibility of proper administration... under the uninspired leadership of the later Emperors was a considerable factor in the Fall". To support the needs and whims of the population, food from twenty agricultural worlds was brought by ships in the tens of thousands, fleets greater than any navy ever constructed by the Empire.

"Its dependence upon the outer worlds for food and, indeed, for all necessities of life, made Trantor increasingly vulnerable to conquest by siege. In the last millennium of the Empire, the monotonously numerous revolts made Emperor after Emperor conscious of this, and Imperial policy became little more than the protection of Trantor's delicate jugular vein..." (Encyclopedia Galactica)

In Prelude to Foundation (1989), Asimov indicates that this was not always so: originally, most of Trantor's basic food needs were fulfilled by Trantor's "vast microorganism farms." Yeast vats and algae farms produced basic nutrients, which were then processed with artificial flavors into palatable food. The subterranean farms, however, depended entirely on care provided by tik-toks (lesser robots), and their destruction following an abortive uprising (chronicled in Foundation's Fear) left the Imperial capital largely dependent upon food brought from other worlds. Hindsight observers might recognize that it was therefore the tik-tok uprising, perhaps more than any other single event, that set the stage for Trantor's sack and the final collapse of the Galactic Empire . Foundation's Edge mentions algae growing on Trantor, which is called a totally inadequate source of food, so it is possible some of the later Emperors attempted to rectify the situation with limited success.

Trantor represents several different aspects of civilization. At once it is both the center of power in the galaxy, and also the administrative head. It is also an illustration of what could eventually happen to any urbanized planet. Asimov used the Roman Empire as the creative basis for the Foundation series , so Trantor is in some sense based on Rome at the height of the Roman Empire. Trantor also illustrates the mentality of human beings that was first encountered in Asimov's The Caves of Steel , wherein human technology will ultimately result in a complete encapsulation of a population, and that population will eventually suffer psychosis associated with that total encapsulation. Isaac Asimov did once say that these encapsulated cities represented the kind of place in which he'd like to live (in real life, Asimov was an agoraphobic individual who spent virtually all his time writing inside his New York City apartment; he seldom traveled and when he did, only by train and never by airplane). He did not even realize how distasteful some people found this until someone asked him about it.

The Star Wars films by George Lucas have made some serious attempts to illustrate a planet like Trantor, the first being Coruscant (which was in some early sources called "Jhantor", in homage to Trantor). Coruscant is one of the more convincing images on screen we have today of Isaac Asimov's conception of the world-girdling city of Trantor. Coruscant is a planet-covering open-air city, while Trantor's buildings are all subterranean or under domes due to worsening weather conditions. Asimov's Trantor thus differs from Coruscant in that Trantor is more practically adapted to inclement weather, although weather control devices are used on both planets. It should be noted that there is a planet called Trantor in the Star Wars universe, and it is also an ecumenopolis.

The planet Helior in Harry Harrison's "Bill, the Galactic Hero" satirizes Trantor, highlighting the problems of atmosphere, waste disposal, and navigating about a world-sized city. In the Runaway series of adventure games, Trantor is home planet of this universe's alien species. However, no connection besides the name are made to the original. "TrantorCon 23309" was proposed by Larry Niven at Worldcon in 1976. The Warhammer 40k sources mention dead cities upon the quarantine planet of Proxima Trantor. Weber's World, the administration planet of the United Planets in the Legion of Super-Heroes's time, is said to be in the Trantor system.

Although by 22,500 years in the future, there had been much racial intermarriage and most people were multiracial, according to Asimov, in the Galactic Empire as a whole as well as on Trantor itself, there were still some recognizable populations primarily descended from the original races on Earth . What we call Caucasians were called Westerners (except Blonds who were called Northerners), what we call East Asians were called Easterners, and what we call Black people were called Southerners. No one could remember why these names were used because no one remembered human origins on Earth .

In the original Foundation Trilogy, there is no indication of Trantor being divided among wildly diverse cultures; likewise, the surface is described as covered with towers rather than domes. Its depiction in Prelude to Foundation and Forward the Foundation may be considered another example of retconning. Although some have been confused by the apparent conflict between Trantorian self-sufficiency in terms of food supply in Prelude and the subsequent characterization in Encyclopedia Galactica of the planet as dependent upon twenty agricultural worlds for food, there is no conflict. Prelude depicts an earlier period of Imperial history, and as subsequently explained in Foundation's Fear, the food situation on Trantor changed precisely because its subterranean farms were shut down in the wake of the abortive tik-tok rebellion. That book directly establishes that it was this decision that made Trantor dependent on the produce of twenty agricultural worlds—ironically, the same worlds over which Neotrantor would hold its last, feeble sway.

Community content is available under CC-BY-SA unless otherwise noted.
Advertisement